I have finally finished the singleplayer campaign in DoWII. Actually I finished over a week ago, but I finished none-the-less.

The game starts off great, gets tough in the middle, then becomes easier towards the end. Over all I had a great time with the game, and even started a new campaign. DowII fills two needs I have, it has some rpg elements and it is a tactical squad based gameplay that I don't always get from a RTS.

But the game does have some negatives; squad ai is a bit shoddy at times, specially in the late game, i.e. not using cover like instructed or not melee units not engaging the enemy when being attacked with ranged weapons. The Eldar need are way too tough in the middle part of the game, like level 8-12. The multiplayer is just a stripped down version of what was in Company of Heroes. Tried to do a mix of the story based gameplay from the first DoW and the risk style gameplay from Dark Crusade and Soulstorm.

Even with some of the negatives, I still loved the game.
at Thursday, March 19, 2009 No comments:

My review for F.E.A.R. 2 Project Origin is finished and published. You can read it at GameSquad.com, or at PluggnPlay.com. It's the same review on both sites, so no need to read it on both, unless you're really bored.

But, for those who may not want to read it I will just tell you what I thought. The game is awesome, I loved the singleplayer game and highly recommend this game to everyone who is a fan of shooters, it's the best fps to come out in a while for the PC.

The game is extremely polished, well paced, great action, good looking and just a great game all around. But there was one negative thing about FEAR 2 and that was the non-existent multiplayer on the PC. When will developers start to realise that Gamespy is a crappy multiplayer matchmaking hosting service. Every game that I have ever played that uses Gamespy has been garbage.

Again, read the review if you want, but know that I thought the game was very good and everyone should play it!
at Wednesday, March 11, 2009 1 comment: 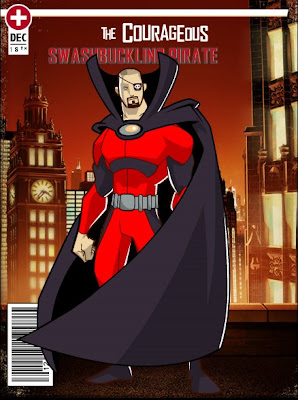 Ok, so I am not a fan of the name, but it was still pretty fun to create a superhero. I saw some other bloggers making heroes, so I thought I would give it a shot myself.
at Saturday, March 07, 2009 4 comments:

I will be the first one to admit that I am not very good at pvp on any game. Well, I did do ok in WAR, but I was playing a chosen wielding a two-hander, and he was tearing stuff up. But other than that, I plain stink at pvp or dueling.

I do play on a pvp server, and I agree that if I don't like to pvp then I should go somewhere else and stop complaining, but I have friends that play on that server, and the fact that I am under constant threat does add to the game at times.

Last night I was attacked by a Paladin while finishing a daily quest in Icecrown, and he tore me up. I am a protection warrior, decent gear but not great, and I couldn't do anything to him. Well, I was more that a little upset with that and almost logged out because that is not the first time something like that has happened. I can not figure out why it is I stink so bad, what is it I need to do to improve.

I'm sure one way to improve would be to do more pvp, practice makes perfect they say.I could also learn how to stop being a mouse clicker and start using keyboard shortcuts too, but that is not as easy as it sounds. I don't think macros are the way to go, nor is purchasing the Nostromo gamepad that some say has helped. Is it that I am not reacting fast enough, that I am not using all my abilities, that I am just plain overwhelmed, or is it that I just don't have the gear that my opponent has?

If the answer was a pie chart, then having the gear would occupy the biggest slice. Of all the games that I have pvped in(which is not many), WoW is the most gear dependent game ever! There is a point where gear can take you so far and eventually you do need some skills, which is something I did see when I was doing arenas at level 70. WoW in its current state is also about burst damage too, and I just can not output enough damage to compete.

One apect of WAR that I really enjoyed was the pvp, the combat was slower paced, classes for the most part where balanced, and it was fun. WoW will never be balanced no matter how hard Blizzard trys. What ever they do try to balance in pvp just ends up screwing up pve which is frustrating.

One thing that does get on my nerves is when I hear how so and so just owns in people in pvp, and come to find out that so and so is rocking mostly greens and a few blues. So what is it that he does so well? Is it the attack sequence he is using, or how fast he is pressing his buttons, what exactly is this person doing that I am not doing?

This is not a post about how WAR is better than WoW, or how the pvp in WoW sucks, it's about the fact that I want to be better at pvp and that I am frustrated about how being so bad at it. I have noticed a trend in that when I am having fun, I do seem to do well and defeat is no bother. But it's when I begin to get annoyed and frustrated, my decision making becomes clouded and I press and become even more upset when doing bad, this is what happens way too much.

One thing I have concluded is that my warrior is not going to be my pvp toon, and that I am going to use him for tanking instances instead, something that I really enjoy doing. I keep getting told that I will have more fun pvping when I get my mage to level 80, we shall see.
at Saturday, March 07, 2009 No comments:

I take my war at dawn.

Now that I have complete FEAR 2, I am able to move onto Dawn of War II. So far I can say that the game is totally awesome. It is not the RTS game that I thought it was, but more of an rpg like the classic Jagged Alliance games.