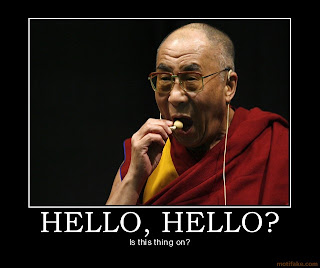 Just kind of wondering! I guess the NBI should suggest to potential new bloggers that it might help to say something of interest, cause clearly I have not. Oh well, here's a few random thoughts I had to help make this post even longer!

DEATH OF AN MMO
Why do people want a game to fail? I have never understood what drives someone to hate a game or company so much that they want a particular game to fail and die. This random thought comes to you courtesy of Syncaine and his post about SWTOR. I'm not surprised because being a long time reader of his blog I know how he feels about theme park MMO's. The death of a MMO regardless of who makes it cannot be a good thing for the industry.

For the record I do enjoy reading Hardcore Casual even if I disagree with most of what is posted because of that very reason. It's nice to have a differing view on things to take me out of my comfort zone on occasion.

MMO'S NEED TO EVOLVE
Every so often I'll see the word 'evolve' with regards to the games industry. It's mostly used when someone is hating on a game either out now or has been announced. All one has to do is look at the myriad of comments about TOR of the response to the new TES MMO that was announced.

What I think is that people are confusing evolution with innovation. I believe that the notion of evolution in the games industry, or for any multimedia industry for that matter is a myth. If you can think it, then probably it has been done in one way or another. The real problem is World of Warcraft - it's arguably one of the best MMO's to date but its popularity has caused there to be a lack of innovation in the MMO genre.

MAX PAYNE 3 IS A PAIN TO THE MAX
I spent the better part of four hours yesterday trying to get Max Payne 3 to run on my computer to no avail. Leave it to Max Payne to make the launch day issues with Diablo III look like a walk in the park.
at Saturday, June 02, 2012 2 comments: