When Does Underrated Mean Bad?

I tend to toss out the word 'underrated' often when talking about certain games and in fact I see it used on the interwebs quite a bit as well. Rage, Syndicate and Darkness II are three games I've played this year that I would consider to be underrated. What exactly makes a game underrated? There really seems to be little criteria to make a game underrated except that it sold little and never met sales expectations. So it would seem to be an underrated game you have to be a financial bust and be liked by either or both critics and gamers. 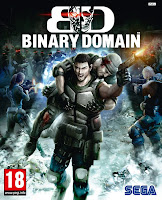 I was genuinely excited to play Binary Domain; the game looks good, has decent voice acting, but the story is what really made me want to finish this painfully brutal game. In the future there are these Hollow Children, robots that look and act human in every way and they themselves believe they are human. This has freaked out some of the world's leaders so they create what is called a Rust Crew, a group of people sent in to eliminate any and all Hollow Children and to take their creator alive if possible.

The story premise frankly is awesome, very Blade Runner-ish if you will. But except for a couple of pretty cool cut scenes and a nice plot twist at the end, the game does nothing with the story. This is the only game that I can think of where I wanted more exposition, more cut scenes to flesh out and expand the story instead of all the mindless combat that you get instead. What you get with Binary Domain is a cool story idea with lots of cut scenes to slow down the game and mounds of awful, crappy cover based combat with awful controls.

Ultimately Binary Domain is a boring, repetitive, formulaic and contrived Japanese cover-based shooter that misses the mark with the one thing that was even remotely interesting, and that is the story. I could have mentioned that the mouse and keyboard controls are awful, it doesn't support a wired Xbox controller like every other controller supported game, and there's a loyalty system much like KOTOR as well, but it doesn't matter cause the game is just bad. Underrated my eye, Binary Domain is garbage.
at Saturday, September 15, 2012 6 comments:

Things have been pretty quiet on the blog front. Guess that means I've been playing tons of games, right? Sort of.

I finished Sleeping Dogs about two weeks ago, and let me tell you that game is 100% awesome. It has just enough stuff to do in the world besides the main story to keep me interested, excited and not feel overwhelmed. I absolutely loved the game.

Last week I finished Binary Domain; a game that seems to be receiving rave reviews from gamers but has apparently sold like poo. What intrigued me most, and kept me playing as well, was the story. The problem is the story doesn't seem to go where I thought and hoped it would, and the game is so focused on its repetitive combat. Honestly it could have been so much better.

I did start Fable III finally, and I have to say I am enjoying the game so far. I hear that the ending is pretty bad, but it can't be Mass Effect 3 bad, right? I've played the first two games and not been overly pleased with either one but I've decided to go into this one with an open mind. For me the first two games always started off fun but as time goes on little gameplay elements start to nag at me to the point of frustration then eventual hatred. The one thing that I have a feeling I will get tired of fast is having to greet each and every person to gain their trust so I can lead some revolution.

But in between all of that there's still League of Legends. I've been in quite a slump over the past week, to the point I thought I was going to uninstall and quit the game for good. Unfortunately addictions are no so easily done away with.
at Monday, September 10, 2012 No comments: