Last night I stumbled upon an article about how Battlefield 3 for the PC will not have an in-game server browser unlike the console versions which will include a server browser. That just seems backwards if you ask me. Instead what the PC version will use is a program called Battlelog through a player's Internet browser.

Today I read an article on PCGamer.com about the new system and still I was scratching my head wondering why such a thing was needed for the PC. After reading the article I thought to myself that I may not be getting BF3 because of this seemingly complicated and unnecessary requirement to play online.

Well then I scrolled down to the comments and I must tell you, I was surprised at what I was reading. You can tell the responses to the article because the comments are in a gray box and they are primarily negative. What was surprising was the amount of replies to those comments that were positive. There were far more comments about how easy the system worked and how much better Battlelog was compared to a server browser. There were people actually positive on something EA is doing, shocker I know.

I firmly believe that the majority of people who hate EA have either forgotten or don't know why they dislike the company. Having no in-game server browser for arguably one the biggest multiplayer games to be released this year is just begging to get even more hate. But apparently Battlelog works, and it worked well for many who commented on the PCGamer article.

This reminds me of the time a few years ago when I spit venom in Activision's way when I learned Modern Warfare 2 was going to use peer-to-peer matchmaking. P2P matchmaking is the bane of any PC game and is almost certain death for its online longevity, unless you're Modern Warfare 2.

I admit, I was going to forget about BF3 all together after reading the article, but reading the many positive comments about how the new Battlelog works and that it worked well has calmed my fears and given me renewed interest in the game.
at Sunday, August 21, 2011 5 comments:

The Pile of Funk.

A few weeks ago Anjin wrote about the pile. You know, that physical or even virtual stack of games that's been sitting there waiting for you to play. Everyday it calls out to you just begging for you to play and yet you sit there ignoring their cries for attention. Ok, so maybe that second part is just me, but you get the idea.

I too have the pile, but for me it causes what I refer to as the funk. The funk is an overwhelming desire to play every game you own but not being able to come to a decision as to which particular game to play. Symptoms include sitting at your desk and staring off into space, playing multitudes games for 3-5 mins at a time, a general lack of interest in current game because you feel you should be playing that other game and the occasional tv watching.

I do have a touch of the funk right now, but it's not too bad. This time however the cause is twofold: I am still waiting for my replacement video card so I can play games like Witcher 2 and Bulletstorm and I have this overwhelming desire to play one of the many strategy games that I have purchased over the years.

The video card thing isn't such a big deal because I should be getting the replacement soon. The monkey wrench in this touch of funk is the strategy gaming desire that I have. I'm not talking Real Time Strategy like say Company of Heroes, I'm referring to games like Hearts of Iron III or Victoria II, Europa Universalis III or EU:Rome, you know those games that have manuals the size of small novels. I really enjoy those grand strategy type games, but I don't necessarily enjoy the time it takes to learn how to play one.

What it boils down to is that I need to stop buying games on sale and I just need to not be overwhelmed by the need to learn whichever strategy game I want to play and just play it!
at Saturday, August 20, 2011 1 comment: 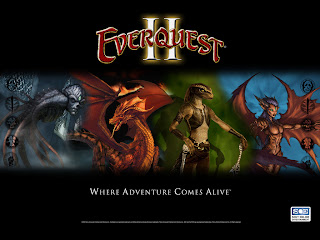 In this inaugural edition of Let's Play Some I thought I would start of with something easy like Everquest 2. I know what you're asking your, 'why is this the Furbottom Edition?'. Well I will get to that here in a second. Because this post may be long with lots of terrible looking screenshots, I have decided to add a jump break to this post. So if you are incredibly interested or bored join me after the break and we will get to the adventure!

I have been know to enjoy movies that the mainstream deems stinkers. For example, I love Doom, Silent Hill and Hitman is one of my absolute favorites! I had all but forgotten about the Ultramarines movie, but judging from the trailer it looks to be all kinds of awesome.

Video after the break!