When it comes to Pathfinder, I am a novice. I know nothing about the world, the ruleset, nothing other than it's a fairly popular pen and paper rpg. When I saw the videos for Pathfinder: Kingmaker, it instantly reminded me of the older Baldur's Gate games or more recently the Pillars of Eternity and Tyranny games by Obsidian.

I am a big fan of computer rpg video games, and I have a special fondness for the isometric style made popular with the original Baldur's Gate. So naturally I was very intrigued by Pathfinder. So much so that I decided to take the plunge and purchase the game.

So what are my thoughts after just over an hour of playtime? Well I'm glad you asked. I like it so far. Pathfinder: Kingmaker is just familiar enough in look and feel of past isometric rpg games that fans of the past Pillar's or BG games should find enjoyment with Pathfinder.

The ruleset for the Pathfinder pen and paper which Kingmaker is based off of is very reminiscent of Dungeons & Dragons. For those like me that have never played the Pathfinder game but have played anything based on the D&D rules, I think, will be comfortable with Kingmaker which should keep the learning curve to a minimum. I remember the first time I played the first Neverwinter Nights and absolutely hating the game because it had feats and abilities, this stuff that wasn't in the first Baldur's Gate. That honestly ruined that game for me for the longest time. These days that kind of stuff is very common in rpg's so when I went back to play Neverwinter again I had a great time.

So what is bad about Pathfinder: Kingmaker? I'm still in the tutorial, but I would say that there is nothing bad about the game thus far, but there are some things I wish were different. Recent crpg's have spoiled me with some of their quality of life options. Things like movement speed toggle between slow, normal and fast, or a show interactive object toggle. A few things I don't like is the shared inventory weight, really just inventory weight in general as it slows character movement which is already slow to begin with. I also am not a fan of character movement during combat, your front line fighters take an awfully long time to walk up to the enemy.

One area I do need to spend more time learning about is spellcasting. According to the tutorial, spells that are cast cannot be used again until the spellcaster has rested. It's a mechanic found in the older infinity engine games, Baldur's Gate/Icewind Dale, something I've not been a fan of ever. I created a fighter for simplicity sake to learn the game, but very early on you will get a bard, sorcerer and cleric in your party, all of which can cast spells.

So far I am enjoying Pathfinder: Kingmaker. I have purchased very few PC games this year, but I love isometric crpg's so I was actually excited for this game because I know nothing about the Pathfinder IP and I thought this would be a great introduction to that world. I hope to share more thoughts about Kingmaker as I make my way through the game.
at Wednesday, September 26, 2018 1 comment: 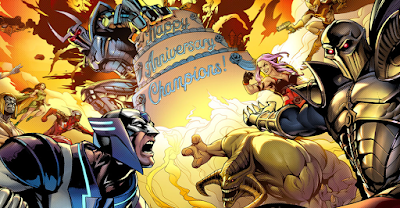 Happy anniversary Champions Online! It's hard to believe you are 9 yrs old and you're the longest and only active superhero MMO today! You are also a slightly unbalanced and generic MMO with uninspired questing, a terrible cash shop and f2p restrictions.

9 years ago I was fortunate enough be given a copy of CO to review for a site named Gamesquad, an opportunity I am grateful for. Unfortunately the website doesn't exist anymore so I'll have to dig up a copy of the review to see what I thought of the game at launch. I have spent quite a bit of time with CO the past three weeks, I hit level 38 which is a couple short of max so I might write-up a re-review just for the heck of it.

What I will say about Champions Online right now is the questing is bland and generic. CO is highly reliant on gear which makes the early levels really tough. If you don't have a gold account or lifetime sub you are limited to pre-made archetypes, some of which from what I've read online are plain bad. Did I mention the questing is generic? There is very little in Champions Online that makes you feel like you are a superhero in a comic. Replace the superhero gimmick with a fantasy setting, or a sci-fi setting, or anything that comes out of Korea and the game would be the same. It's so generic that at times I struggled to get excited to login and play.

So yes, Champions Online is 9 years old this year, it is a time capsule of MMO game design from almost a decade ago. 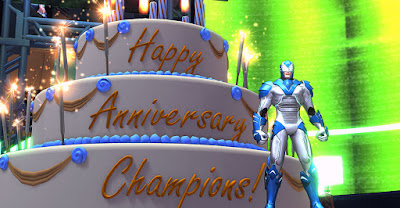