This just in; Dragon Age is awesome!

I have spent about four hours playing the PC version of Dragon Age, and it is sweet. The game is beautiful, there is a ton of voice acting and the combat it great. The best part for me is that Bioware has finally solved the camera issues that plagued both NWN and NWN2. The camera in NWN 2 was tolerable with some tinkering, but still a pain if trying to play from an off the shoulder camera angle. I figure that developing a console version at the same time helped.

My two complaints; trying to redeem my promo codes for my preorder was more than a pain, and there just is TOO much blood in the game. I am all for gore, but this is silly honestly. 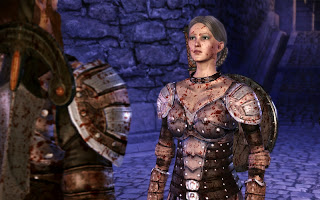 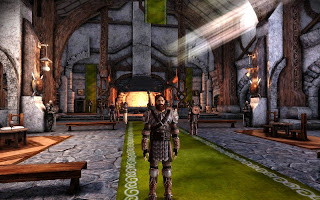 The first pic is of me and dear ol' mother after a battle with some intruders, the second one is of my human warrior named Cypher.
at Tuesday, November 03, 2009

Sounds like you're having a good time. Since it's a Bioware game, I have to ask how the story holds up so far. Did it get hooked right up front?

Yes I did. The voice acting so far is top notch, and there is a lot of it.

Hehe, yes, the blood is ridiculous. There is a mod that keeps it manageable, or at the least off your face, though that suddenly becomes strange when all of your armor is covered in blood but your face is sparkly clean. Still, it's better.

I just turned off the option for blood, so now it just soaks the ground, a lot.