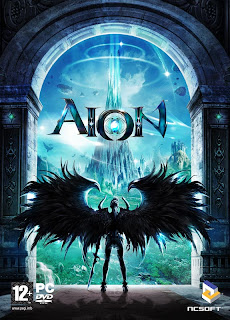 Well it's finally here, my Aion review. To summarize, I thought that Aion is not a bad game, in fact it's pretty solid; but not being able to experience the PvPvE till level 25 and the grinding gameplay was too much for me.
I could live with the level 25 requirement if the game didn't punish you for trying to get their. If the level grind isn't brutal enough for you then it's time to give Aion's crafting a try, uber brutal. I eventually swore off crafting because I could but upgrades faster than I could make them. It was amazing how much money I saved not trying to raise my crafting expertise a few points.
If it sounds like I hated the game, I did, at first. But once I gave up on the Assassin and went with the Chanter, things got much better for me.
Because I have to give the game a number, I gave it a 7/10, primarily for the grind and the lack of anything real unique in the game. If down the road NCSoft allows a free trail, I would recommend that everyone give it a try at least once, specially if you like WoW, WAR or EQ2.
I do have some free time left and I do want to try the new xp patch that came out after I started writing the review to see how much of a difference there is. But I don't miss playing the game, and not playing it has freed me up to play something like Borderlands which I do look forward to playing.
at Wednesday, November 11, 2009

"not being able to experience the PvPvE till level 25" -- I'm hearing this a lot about Aion, and it points to one thing WAR did right: being able to hit the PvP from level 1.

Ok, so not really a comment on Aion... :D That said, your review complements everyone else's in making me pretty sure it's not a game I'll want to pick up. Nothing *wrong* with, it, but no compelling need to get it.

I played in the open beta a bit, but didn't play much in live. I lost interest because of the grind, not being able to PvP without getting halfway through the game, and having flight be so limited. I really think that PvP MMOs need to follow Guild Wars and Warhammer and allow some kind of mechanic to participate in PvP quickly.

Flight is such a gimmick, and something I wish I had mentioned in the review. You can't fly in all areas and players are limited to a minute in the air, very lame.

Nice review, Dub. Glad you played it instaed of me. Whew, another bullet dodged. More time for Dragon Age and Torchlight. And Champions. And maybe LotRO. Oh, somebody help me....

Thanks for the comments. BTW LOTRO is free to play till the 18th, so I am going to put Dragon Age on hold at least till then. By that time I should know wether or not I am going to resub again.

Also, I finished my first play through of Borderlands a couple days ago, awesome game!